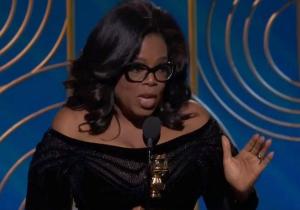 Oprah Winfrey received not one but three standing ovations as she delivered a rousing speech after being presented with the prestigious Cecil B. DeMille award at the 2018 Golden Globes on Sunday night.

The award is presented to a person who has made "outstanding contributions to the world of entertainment." Oprah became the first black woman to receive the honor.

Winfrey used her speech to speak out against sexual assault and harassment of women.

"For too long, women have not been heard or believed if they dare speak the truth to the power of those men. But their time is up," Winfrey said. "Their time is up!"

"I want all the girls watching here and now to know that a new day is on the horizon!"

"And when that new day final dawns, it will be because of a lot of magnificent women, many of whom are right here in this room tonight, and some pretty phenomenal men, fighting hard to make sure that they become the leaders who take us to the time when nobody ever has to say 'Me Too' again!"

After the speech, there were calls for the former queen of daytime TV to run for President in 2020 on social media.

And host Seth Meyers did his part: "In 2011, I told some jokes about our current president at the White House Correspondents Dinner, jokes about how he was unqualified to be president."

"And some have said that night convinced him to run. And if that's true, I would just like to say Oprah you will never be President. You do not have what it takes. And Hanks. Where's Hanks? You will never be vice president."

Her longtime partner Stedman Graham told the Los Angeles Times: "It's up to the people. She would absolutely do it."