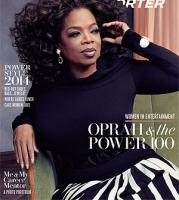 Oprah Winfrey doubled what she spent on her Weight Watchers investment in one day.

Oprah purchased 10 percent of the company for $6.79 a share adding up to a $43.2 million investment.

But the mere revelation that she had invested in the company and obtained a seat on its board, sent the stock soaring. The stock closed on Monday at $13.92.

That means Oprah's stock is now worth $88.6 million and the TV queen made a cool $45.4 million in one day simply with the revelation that she was now involved in its operations.

Not only did Oprah make all her original investment back, she doubled it in one day. Now that's a return.

"Weight Watchers has given me the tools to begin to make the lasting shift that I and so many of us who are struggling with weight have longed for," Winfrey said in a statement.

"I believe in the program so much I decided to invest in the company and partner in its evolution."