'One Direction's Zayn Malik Calls Off Engagement To Perrie Edwards 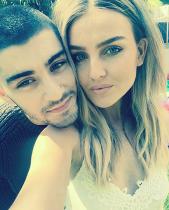 Zayn Malik has called off his engagement to Perrie Edwards.

Months after abruptly quitting One Direction, the 22-year-old singer has ended things with his girlfriend -- who was thought to be the reason behind his decision to leave the band.

"He wanted to go and spend some time with his family and missus," former bandmate Liam Payne said in May.

Zayn explained: "It is crazy and wild and a bit mad. But at the same time I've never felt more in control in my life. And I feel like I'm doing what's right – right by myself and right by the boys, so I feel good."

According to People magazine, Perrie Edwards, a member of the group Little Mix, is "devastated" by the split.

The couple had been engaged for nearly two years.