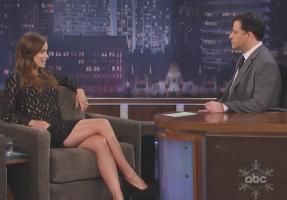 In an appearance with David Letterman, Olivia Wilde (photos

) tells the host what it was like to shoot a nude scene for her new film 'Third Person'.

"Well, it's great now that I've had a baby because I can look at it and go 'Yup, that was once the way it was," joked Wilde.

"But it's funny because we shot it in Italy. For them, being naked is no big deal. They're way less conservative."

"And I noticed that had been strategically removed from the film, which I approve of."

"Running downstairs is not great dressed but naked it's bad. There's things that no one should see. The body does things that ..."

"Well, people are looking at your stuff," chimed in Letterman.

"Yeah, and it's... jiggling," she said, motioning with her hands.