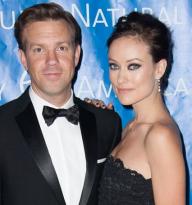 ) and Jason Sudeikis are expecting their first child.

Wilde's publicist has confirmed the news. This will be the first child for both actors, who became engaged in January.

Both actors were married once before, Wilde to Tao Ruspoli and Sudeikis to Kay Cannon, however, did not have any children.

They met on the season finale of 'Saturday Night Live' in 2011 and began dating six months later.

"I am not trying to have kids now – there's no strict plan for anything in my life," Wilde told Marie Claire magazine earlier this year. "What happens, happens."

"He's so good with kids... I've never before experienced looking at someone and thinking, 'That's who I want to raise a child with.'"