Oksana Grigorieva: I Thought Mel Gibson Would Kill Me 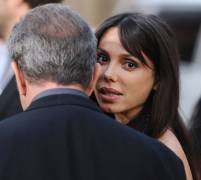 We've all heard the leaked tapes. Now Oksana Grigorieva says people who are still on the fence should have no doubt that Mel Gibson was abusive to her.

"I thought he would kill me," says Grigorieva in excerpts released from her interview with 'People' magazine.

The Russian-born musician says Gibson often flew into jealous rages, talked about suicide, even brandished a gun in front of her before he hit her while she was holding their baby.

"I needed to document his threats," she says of why she decided to record their conversations.

Although, she denies she leaking the angry phone calls and refutes Gibson's claim that she planned on using the tapes to extort him.

"I'm not angry at him," she says. "For the sake of Lucia, I really want him to be well. He has to have the courage to be responsible for what he's done."

We'll know more once the issue hits newsstands on Friday.