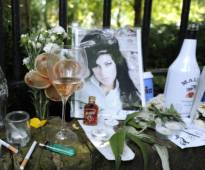 Amy Winehouse's family says toxicology tests show there were no illegal drugs in her system when she died.

The tests showed "alcohol was present," but it hasn't yet been determined if it played a role in her death.

Winehouse's father, Mitch, had been adamant that Winehouse had beaten her drug habit, even though it had been widely assumed that it played a part in her death.

At her private funeral, he said that she had been doing her best to control her drinking before she passed away.

"She was trying hard to deal with her drinking and had just completed three weeks of abstinence," he said. "She said, 'Dad, I've had enough, I can't stand the look on your and the family's faces anymore.'"

The 27-year-old singer, who battled drug and alcohol addiction for years, was found dead in her London home on July 23.