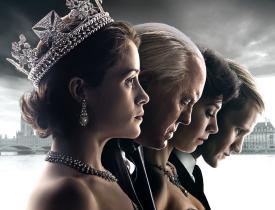 In the teaser for the second season of 'The Crown', as Queen Elizabeth's marriage and empire crumbles around her, she must do what is required to ensure the British monarchy survives.

Beginning with soldiers in Her Majesty’s Armed Forces fighting an illegal war in Egypt, and ending with the downfall of her third Prime Minister, Harold Macmillan after a devastating scandal, the second season bears witness to the end of the age of deference, and ushers in the revolutionary era of the 1960s.