Neill Blomkamp Wants To Make Another 'Elysium': 'I Can Do It Better' 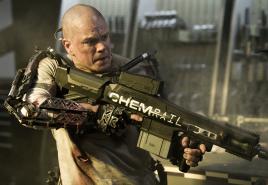 'Elysium' may have been panned by critics and moviegoers but Neill Blomkamp thinks he can make a better film in the movie's world if given the chance again.

'Elysium' starred Matt Damon in the year 2154, where the very wealthy live on a man-made space station while the rest of the population resides on a ruined Earth. Damon's character Max on a mission to bring equality to the polarized worlds.

"Elysium is more something I feel like I could have done better," the 'District 9' director admits in an interview.

"I think that if you were to take something like Elysium and play with it inside a different setting – you would end up, I think, with something well thought through and that has all of the thematic elements that I wanted."

"I still love the set up to Elysium. The idea of the separation of class warfare presented with this space ring is incredibly appealing to me and I would love to go back and make another movie in the world of Elysium because it's compelling."

"I just think I can do a better job in setting up what the themes are more clearly and what the character’s motivations are. I can do it better, I think."

The 2013 film, which also starred Jodie Foster and Sharlto Copley, still managed to earn a profit due to international earnings of $193 million. However, it wasn't the success the studio had hoped.