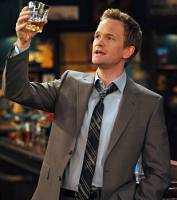 Neil Patrick Harris appears to be unrecognizable in the first photo from the set of Netflix's adaptation of 'Lemony Snicket's A Series of Unfortunate Events'.

The former 'How I Met Your Mother' star is playing Count Olaf in the series that's filming in Vancouver.

In the 13-part series of books, Olaf is described as extremely tall and thin and having a unibrow, a wheezy voice, gleaming eyes and poor hygiene. He is often distinguished by the tattoo of an eye on his left ankle.

Following the death of Bertrand and Beatrice, the Baudelaire orphans are placed under his care. However, he is only interested in the fortune left behind by their parents.

Jim Carrey played the character in Brad Silberling's 2004 film that failed to deliver at the box office.