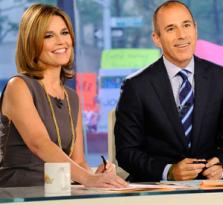 NBC has fired its 'Today Show' anchor Matt Lauer after a sexual harassment allegation was made against him.

"On Monday night, we received a detailed complaint from a colleague about inappropriate sexual behavior in the workplace by Matt Lauer," NBC News president Andrew Lack said in the memo to staff.

He said the allegation "represented, after serious review, a clear violation of our company's standards. As a result, we've decided to terminate his employment."

Lack also hinted that there may be more to come.

"While it is the first complaint about his behavior in the over 20 years he's been at NBC News, we were also presented with reason to believe this may not have been an isolated incident," he said.

Lauer's co-host, Savannah Guthrie, announced the news at the outset of the show on Wednesday morning and remarked: "All we can say is we are heartbroken; I'm heartbroken."

"We are deeply saddened by this turn of events. But we will face it together as a news organization — and do it in as transparent a manner as we can," she promised. "And I will tell you right now, we do not know more than what I just shared with you. But we will be covering this story as reporters, as journalists. I'm sure we will be learning more details in the hours and days to come, and we promise we will share that with you."

Matt Lauer has been terminated from NBC News. On Monday night, we received a detailed complaint from a colleague about inappropriate sexual behavior in the workplace by Matt Lauer. As a result, we’ve decided to terminate his employment. pic.twitter.com/1A3UAZpvPb