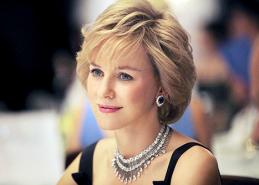 Watts dons a blonde wig and outfits Diana was seen wearing in public in the film that appears to center around her post-divorce romance with Dr. Hasnat Khan, played by Naveen Andrews.

Khan, who was reluctant to trade his anonymity, has been called Diana's "true love" by friends.

"I don't know how to reach you," Andrews' Khan responds to an invitation for lunch.

'Diana' will be released on October 10. Those in the UK can see it early beginning on September 20.