'MythBusters' Team Kari, Tory and Grant Get Their Own Netflix Show 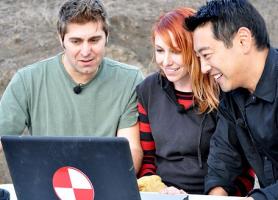 The 'Mythbusters' team is getting its own Netflix show.

Following the cancellation of the long-running Discovery channel series, Kari Byron, Tory Belleci and Grant Imahara will host and star in 'The White Rabbit Project' for the service.

'MythBusters' Jamie Hyneman and Adam Savage won't be involved in the project that will follow a similar theme. It's described as "Mythbusters in Wonderland."

The name of the series refers to some of the myths and legends you encounter when you go down the rabbit hole on the internet. The trio will attempt to verify or discredit the stories using science.

'The White Rabbit Project' has a premiere date of December 9.