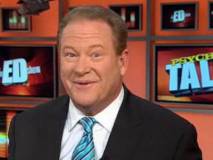 The remark came as Schultz spoke about Ingraham's criticism of President Obama's trip to Ireland, where he enjoyed a beer while the Midwest was experiencing devastating tornadoes.

"But you know what they're talking about, like this right-wing slut, what's her name? Laura Ingraham? Yeah, she's a talk slut. You see, she was, back in the day, praising President Reagan when he was drinking a beer overseas. But now that Obama's doing it, they're working him over."

Ed Schultz did not host MSNBC's 'The Ed Show' tonight, but he did open it with an emotional address to his viewers as he apologized for his remarks.

"On my radio show yesterday, I used vile and inappropriate language with talking about talk show host Laura Ingraham. I am deeply sorry, and I apologize," he said. "It was wrong, uncalled-for and I apologize for the severity of what I've said."

"It doesn't matter what the circumstances are, what matters is, what I said was terribly vile."

He said he tried to call Ingraham directly to apologize and left a message with his apology. He also met with MSNBC management and offered to take himself off the air "for an indefinite period of time" with a unpaid leave.

You can see the apology in its entirety below: