Monica Lewinsky Lauds Jay-Z For Admitting To Infidelity On '4:44' 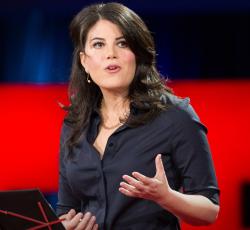 Monica Lewinsky, who has some experience with men in power dodging accountability, is lauding Jay-Z for admitting to infidelity on his '4:44' album.

"Jay-Z had a choice," Lewinsky writes in Vanity Fair in a piece titled 'Jay-Z, Prince Harry, Brad Pitt, and the New Frontiers of Male Vulnerability'.

"Having been called out publicly by his wife in her fierce 2016 album and video, 'Lemonade,' Jay-Z knew that his fans wouldn't have blinked if his next album skimmed past the allegations. That's not uncommon for men to do."

"And it's not as if we hadn't seen Beyonce and Jay-Z out in the world together since then — not to mention, welcoming their twins to planet Earth. Jay-Z could have ignored it all. But, instead, he chose a path of candor that will move the conversation forward and help others."

"It is a refreshing and bracing antidote to see male icons convey vulnerability in an age when Washington's new power elite and our coarsening culture are busy projecting an outmoded caricature of manhood, 24/7."

In his album he says: "This is my real life. I just ran into this place and we built this big, beautiful mansion of a relationship that wasn't totally built on the 100% truth and it starts cracking. Things start happening that the public can see."

"Then we had to get to a point of 'OK, tear this down and let's start from the beginning'. It's the hardest thing I've ever done."