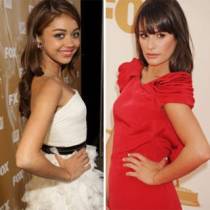 "I have seen her pose on the red carpet. At the Glee premiere for the 3D movie, I was right behind her. It's like a slow motion kind of thing."

"It's very strange. I actually saw a clip of her doing that on the red carpet and you see me in the background with my back turned like I don't know what to do right now."

But after 'Glee' fans blasted the 21-year-old for going after Lea, Hyland said she was simply having fun.

"I did not intend for my comments to be taken in a malicious way," she said. "But I did hate the dress. In no way am I jealous of Lea Michele. I'm happy with my own life and am not jealous of anyone else's in the world."

"But I'm an outspoken person. I own what I said about that outfit. And I mimicked what I saw with my own two eyes."

Meanwhile, Lea Michele has split from her actor boyfriend Theo Stockman. The couple had been dating for two years.

See a clip from the show below: