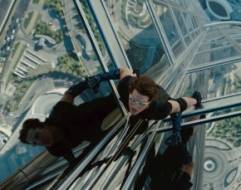 Production has shut down on 'Mission: Impossible 6' after Tom Cruise broke his ankle.

Cruise was injured while performing a stunt for the film where he jumps between two buildings in London.

The 55-year-old actor was attached to a harness while making the leap. However, he fell short and crashed hard into the side of the building.

Paramount Pictures said Wednesday that production will go on hiatus while Cruise makes a full recovery.

Director Christopher McQuarrie explained exactly what went wrong with the stunt in an interview with Empire.

"The speculation was that Tom had somehow missed or fell short. The truth is that the stunt was never designed for Tom to jump from rooftop to rooftop which a) would have been pretty boring and b) when you see the actual shot you'll understand how it was designed. He was always supposed to slam into the side of the building. That's what gives the stunt its energy. He was completely safe the entire time he was doing that. He was padded."

"What happened is a matter of coordinating what Tom is doing with what the camera is doing, which means you have to do it a number of times. And on the fourth try, he hit the building at a slightly different angle and he broke his ankle. He knew the instant that he hit the building that his ankle was broken. You can see it on his face."

McQuarrie says Cruise tried to complete the shot despite the injury so the film had the footage it needed.

"We had four cameras rolling on it. He knew in that instant, 'Well, we're not coming back here. We're not doing this again today'. So he got up and powered through the shot, and then he got off-camera and as soon as he knew he was off-camera he went down."

"He knew that was the only way to preserve the shot. I don't know that I would have the wherewithal to do that."

McQuarrie says that the film remains on schedule to open on July 27, 2018.

"I'm not at all concerned about what this is going to do to our release date. The good news is, Tom is going to make a full recovery."