'Mission: Impossible 6' Heads To London After Wrapping Up In New Zealand 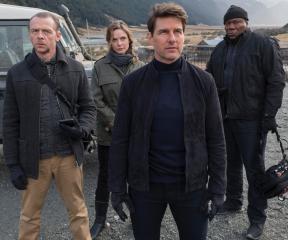 'Mission: Impossible 6' is heading to London after wrapping up filming in New Zealand this week.

Tom Cruise shared a photo with castmates Simon Pegg, Rebecca Ferguson and Ving Rhames to mark the occasion, writing: "Thank you to the amazing people of New Zealand! I've had a great time filming the next Mission: Impossible here."

McQuarrie has promised a "very different Ethan Hunt" and a closer look at Cruise's character.

"I've seen five of these movies and I don't know who Ethan Hunt is," he said. "One movie sort of dealt with his personal life; the other movies are about people speculating what’s really going on in Ethan's head."

"I want to know who Ethan is in this movie, I want an emotional journey for this character, and Tom really embraced it."