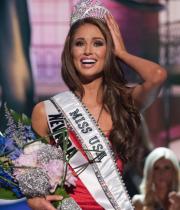 The newly crowned Miss USA, Nia Sanchez, is denying rumors that she faked residency in Las Vegas in order to compete as Miss Nevada USA.

This after a "well placed" source told Fox News that Sanchez "never actually moved to Nevada, but continued to work at Disney and live in California, setting up some minimum paper trail to appear like she was in Nevada and allow her to compete."

What also cannot be disputed that is Sanchez competed in Miss California USA in 2010, 2011, and 2012 before being crowed in Nevada.

The source claims Sanchez was told exactly what she had to do in order to meet the competition's six-month residency requirement and compete for the title.

"Las Vegas is my home. I have a house there with a friend," she explains in an interview. "I actually had an agent that was working in Nevada a lot so I figured why not work in that state, and then I looked into the pageant program because I had done pageants before."

"I really liked the way that it was run, the director that ran it," she continues, referring to friend Shanna Moakler. "It seemed like a really healthy, well-run state program. So I decided to go there since I was living there anyway."