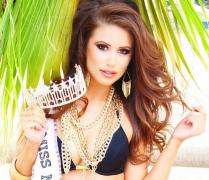 Miss USA is inadvertently adding fuel to rumors that she faked a move to Nevada to compete in and win the pageant.

This after Nia Sanchez was unable to name the capital of Nevada, what is supposed to be her home state, in a live radio interview.

While appearing on 'The Todd Show', the brunette beauty was asked Nevada's capital.

Sanchez fumbled with "Oh, um, ah, oh my gosh" until the host reminded her it was Carson City.

"Thank you, I was going to say that! I was like, that one DJ host on MTV, back in the day, his name, that's how I always remembered it," she said. "Carson Daly, that guy!"

Sanchez has been under fire after a source close the pageant said she "never actually moved to Nevada, but continued to work at Disney and live in California, setting up some minimum paper trail to appear like she was in Nevada and allow her to compete."