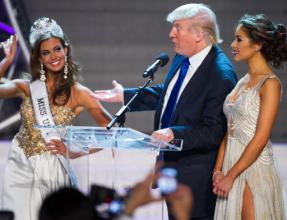 Several former Miss Teen USA contestants are claiming that Donald Trump walked in on them while they were changing.

Four women claim that Trump, who was part owner of the pageant, would often come into the dressing room announced to catch them while they weren't fully dressed.

"I remember putting on my dress really quick because I was like, Oh, my god, there's a man in here," former Miss Teen USA Vermont Mariah Billado tells Buzzfeed. "He would say 'Don't worry ladies, I've seen it all before.'"

Three other women, who want to remain anonymous, say they remember it as Billado does.

Another contestant, Tasha Dixon, tells CNN: "He just came strolling right in. There was no second to put a robe on or any sort of clothing or anything. Some girls were topless. Others girls were naked."

"Our first introduction to him was when we were at the dress rehearsal and half naked changing into our bikinis."

"To have the owner come waltzing in, when we’re naked, or half naked, in a very physically vulnerable position and then to have the pressure of the people that worked for him telling us to go fawn all over him, go walk up to him, talk to him, get his attention."

The Trump campaign has denied the allegations saying they "have no merit."

However, the Republican presidential candidate once boasted to Howard Stern about the matter himself.

"I'll tell you the funniest is that I'll go backstage before a show and everyone's getting dressed," he told Stern in 2004.

"No men are anywhere, and I'm allowed to go in, because I'm the owner of the pageant and therefore I'm inspecting it. 'Is everyone OK?' You know, they're standing there with no clothes. 'Is everybody OK?' And you see these incredible-looking women, and so I sort of get away with things like that."

Billado says she doesn't "support either" candidate and it wasn't about politics.