Miss Iceland Quits Pageant After Being Told To Lose Weight 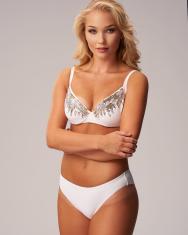 Arna Yr Jonsdottir, Miss Iceland 2015, quit the Miss Grand International beauty pageant a day before the competition because she was told to lose weight.

"If the owner of the contest really wants me to lose weight and doesn't like me the way I am, then he doesn't deserve to have me in the Top 10," Arna Yr tells the Iceland Monitor.

"Yes, my shoulders are a bit broader than the other girls but that is because I was a member of the Icelandic national athletics team and I am proud of that. Of course, I don't take these comments to heart, but to do my best then hear this. Personally, I think I'm fine as I am."

"I no longer have any interest in doing my best in this competition after receiving that message. This is definitely the last contest I shall be taking part in."

The paper reports she was told: "Stop eating breakfast, eat just salad for lunch and drink water every evening until the contest."

The Miss Grand International contest, one of the world's five major international beauty pageants, says it's advocacy and mission is "to spread the message of happiness and we will take a stand and say 'Stop the War and Violence.'"

Arna Yr certainly isn't feeling the love but President of Miss Grand International Organization says it was Miss Iceland 2015 who asked for their advice.

"It is common that the contestants and staffs they exchange the opinion and asked for comments of how to improve their performance because this is beauty pageant and everyone wants to improve their chance in order to win the title," says Nawat Itsaragrisil in a lengthy statement.

"She asked some questions and suggestions from our staffs which they've replied according to what they think, she may be a little bit fat and they recommended her, in good way, to try to lose some weight in order to improve her chance to win."

"There was an incident that she shows her photos from her previous international pageant to me which she looks slimmer and more beautiful which I do not understand the purpose as what we are looking in the competition is the present not what she used to look like."

"One of our conditions of the pageant for security reasons we do not allow anyone to leave the hotel without our acknowledgement, she seems to have her own imagination and do whatever she pleased without obeying any rules and regulations which she read and signed accepting before entering the pageant."

Itsaragrisil then hints that perhaps Arna didn't deserve to be in the pageant because of her behavior.

"For Miss Grand International, the qualification of the winner are beauty, personality and brain and ready to take on the duty to enhance our advocacy for the Stop The War and Violence campaign and perform her duty for example in refugee camps. Our organization have highest standard in order to select the winner. The winner has to be good listener, speaker, good thinking and are willing to give rather than take from others as well as be reasonable with good manner."