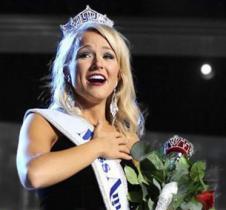 The 21-year-old won the crown Sunday night in Atlantic City after being asked what she thought of Democratic nominee Hillary Clinton and Republican nominee Donald Trump.

"If you're trying to be leader of the free world, everything you say and do matters and all of your actions are held to a higher standard," Shields said. "Both of the contestants have done a good job, but they also need to watch what they're doing."

In an interview after being crowned, she explained: "What I want both candidates to focus on is compromise. Our country was founded on compromise. We're in a state now where both parties just seem to be yelling at one another."