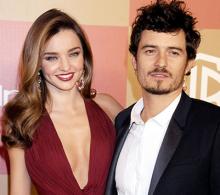 What was the reason for Miranda Kerr (photos

A month after she and Bloom tied the knot, the Victoria's Secret model reveals that they are expecting their first child together. And, in fact, she's already four months along.

"Yes, I am pregnant. Four months along," the 27-year-old tells Spanish edition of 'Vogue'.

"I remember on one occasion in the early days of my pregnancy -- when it was still too soon to say anything -- I had a dreadful time at one job," she says, recalling morning sickness during the first trimester.

Kerr managed to keep the pregnancy under wraps by returning to work just days after their Caribbean honeymoon.

The couple, who have been dating since 2007, announced their engagement in June and secretly married in July.