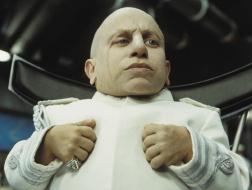 Verne Troyer, who is best known for his role as 'Mini-Me' in the 'Austin Powers' movies, has settled the $20 million lawsuit that he filed against the broker who apparently stole a copy of sex tape he made with his then-girlfriend.

Troyer's attorney Edwin McPherson says that he never plans on selling the sex tape but has signed an agreement as part of the settlement that requires his permission before the broker is ever allowed to promote or profit from the video.

McPherson says the actor's next move will be to include Troyer's ex, Ranae Shrider, among those that need his permission before being able to do anything with the tape. He says that Troyer will do anything needed to keep the tape private and is very pleased the suit is settled: We achieved our goal," McPherson told reporters.

Troyer believes his ex was the one that peddled the tape to the broker after they broke up following six months of dating: "I broke up with her in the middle of June; it was something probably to do with that. It was basically when she decided to give the tape away. I highly doubt that she thought that would get me back with her."

"I feel like I have no privacy. Just because people are seeing something that was meant to be between me and her. That's the biggest reason that I'm trying to stop the tape from being released," adding that he thinks the embarrassment "has already started affecting" his chance at getting future roles.