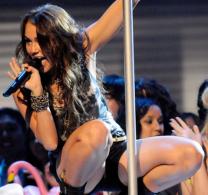 ) said she had been to strip clubs more times than she could count.

"Have I ever been to a strip club? Yes," the now 20-year-old former 'Hannah Montana' star said.

Asked by Dave Berry if she had "ever stuck dollar bills into another lady's G-string," Cyrus quickly replied, "Yes."

"You've made it rain?," followed up co-host Lisa Snowdon.

"Yes," she replied before spotting the surprised look. "Am I supposed to lie? I thought I was confessing. This is therapy."