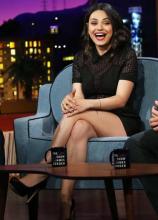 In an appearance on the debut episode of 'The Late Late Show With James Corden', Mila Kunis (photos

) hinted that she and Ashton Kutcher may have gotten married after having their first child together.

"Did you get married?," the British host bluntly asked.

"You either got married or you haven't got married," replied Corden, who then checked Kunis' hand.

"They got married, everybody!" he announced. "We're going to turn this into a wedding party."

Tom Hanks, who is sitting beside Kunis, requests that the band play the 'Wedding March' to celebrate.

Corden also joked about parenting and living with children with the guests: