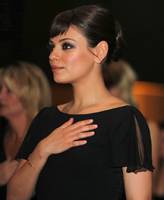 ) found some time out of filming to keep her date with Marine Sgt. Scott Moore.

Kunis agreed to attend the annual Marine Corps Ball in Greenville, North Carolina after Moore asked out the 28-year-old via a YouTube video in July.

The actress was hesitant to accept at first but her 'Friends With Benefits' co-star Justin Timberlake encouraged her to attend the ball during an interview.

"Have you seen this? Have you heard about this?," he asked. "You need to do it for your country."

"Everything went well," says a Marine spokesperson. "It was a great experience for everybody."

Moore and his unit recently returned from a seven month tour in Afghanistan.