Mike 'The Situation' Sorrentino Arrested In Fight At Tanning Salon 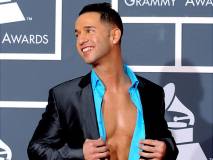 Mike 'The Situation' Sorrentino was arrested on Tuesday after a fight at a tanning salon.

The former 'Jersey Shore' cast member was charged with simple assault after a confrontation at the salon he and his family operate.

Police were called to Boca Tanning Salon following a "fist fight" between Sorrentino and his brother Frank.

The 31-year-old Mike was the only one arrested and booked over the incident.

He was released after posting $500 bail. A court date hasn't been scheduled.

The timing of the arrest is curious since Sorrentino will return to reality television this summer with a show centered around this very tanning salon.