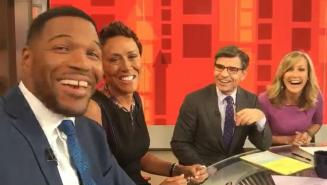 In his first interview since his fumbled exit from the morning show, Strahan told Chelsea Handler that he's actually enjoying the break before joining 'Good Morning America' full time.

In fact, he hasn't even tuned in to watch the show.

"I really haven't had a chance to watch it," Strahan told Handler on 'Chelsea'. "But I think I've been working so hard for the last seven or eight years since I retired from football, that it's been a relief."

"When you get a break, sometimes you kind of go, 'Wow, I kind of needed it.' I needed a break."

Strahan has only appeared on 'Good Morning America' a handful of times since his departure from 'Live'. He begins hosting 'The $100,000 Pyramid' this summer.