Michael Phelps' Fiancee Nicole Johnson: 'There Where Times I Hated Him' 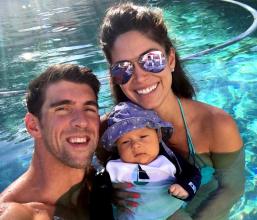 Now that the Olympic Games in Rio are wrapped up, Nicole Johnson says she's in a good place with Michael Phelps as they prepare for their upcoming wedding.

But the former Miss California says their on and off eight-year relationship wasn't without its moments before their 2015 engagement and the birth of son Boomer.

"There definitely were times, and I think Michael would say the same thing, where I hated him," she tells Cosmopolitan. "We were at odds at times."

"Even when I loathed him, there were still times when I was like, 'God, I wish I was with him.'"

"Michael and I both know that had we tried to have a child and get married in the previous time we were together, it probably would not have ended pretty."

"I think it's really sad that it took away from the other athletes who were there and worked so many years to get there," she says. "My first gut reaction was, 'Why in the heck were you out in Rio like this?' You've been given all the stats from staff... you do or you don't know better?"

"Again, it's sad. Rio was amazing. They did a phenomenal job at keeping things safe for everyone and making sure the athletes were very well taken care of, including the families."