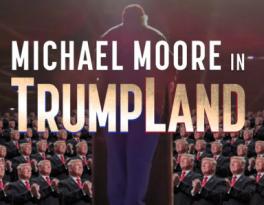 The roughly hour-long film will begin its run at least two theaters on Wednesday. However, Moore is confident this number will increase exponentially over the coming days.

It's recorded as a one-man show in which Moore talks about the candidates just weeks before the country votes. Shot less than two weeks ago, he imagines what would happen if each were to become the next president including a fake news segment.

"See the film Ohio Republicans tried to shut down. Oscar-winner Michael Moore dives right into hostile territory with his daring and hilarious one-man show, deep in the heart of TrumpLand in the weeks before the 2016 election," reads the official synopsis.

"We're flying by the seat of our pants here," Moore told the premiere's audience on Tuesday. "Our goal is to have as many Americans see this over the next five or ten days."

"There's a long tradition of Americans electing people you don't think they're going to elect. What the country doesn't need is to be told that Trump is a crazy, dangerous psychopath, sociopath, all of that."

"Look for the good in Hillary," he advised "I'm not saying forget the bad, but there's a lot of good there."