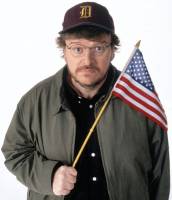 Michael Moore is speaking out against the 'R' rating for his latest documentary 'Where to Invade Next'.

The directory says the Motion Picture Association of America gave the feature an R rating for "language, some violent images, drug use and brief graphic nudity."

In the film, to learn what the USA can gain from other nations, Michael Moore playfully "invades" them to see what they have to offer.

Moore says the MPAA has unfairly rated his film 'R' and what the Association should instead be afraid of is the fact that "this movie contains dangerous ideas that the 99 percent may find upsetting and lead them to revolt."

"Teens will be the most agitated when they learn they will soon be $80,000 in debt just by going to school," he says.

This isn't Moore's first disagreement with the MPAA and don't be surprised if the director makes edits to bring the film's classification rating down.