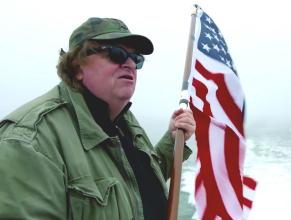 Michael Moore is planning to be in Washington to lead a national protest for Donald Trump's Inauguration.

Although the filmmaker is still holding out hope that the Electorate will block him and the President-Elect won't be sworn in at all.

"If by some awful happenstance Trump shows up to be sworn in on January 20th, I will be there helping lead the national protest and non-violently disrupting the inauguration of a man no one other than the electoral college elected — and I'll also be doing my own thing as a private citizen," he tells THR.

Moore adds he doesn't want to detail all of the actions he has planned just yet.

"If there's one thing we've learned from this election, don't assume anything that's supposed to happen will. If I had told you a year ago that a socialist would win nearly half of all the Democratic primaries and caucuses, that would have sounded insane. If I would have told you that a candidate bragging about his sexual assaults or attacking a Gold Star family would be his path to winning, you would have ended this interview."

A 'Disrupt the Inauguration' protest is already planned in Washington, DC on January 20.

"I expect the Republicans to call a Saturday session on January 21st and start enacting an assembly line of legislation, passing bills into law by voice vote, and rushing them up Pennsylvania Ave. for Trump's signature. This impending disaster requires everyone to get involved now — all hands on deck! This is not a drill!," he urges.