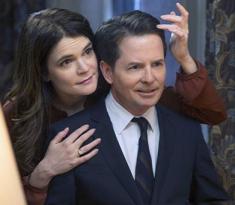 Michael J. Fox doesn't deny that jokes about Parkinson's disease will play a role in his upcoming NBC comedy but he doesn't believe the humor will be offensive.

Fox will play a news anchor with Parkinson's who returns to work after retiring from the business after his diagnosis (preview).

As for jokes about it in the comedy, Fox said: "If someone wants to be outraged, they can be outraged. I don't think it's that outrageous. I feel that this is the reflection of my experience and certainly in the pilot it was more prevalent than it is in subsequent scripts."

"A lot of times when you have a disability, you deal with other people's perceptions of what that disability is. There's nothing horrifying about it to me. It is my reality. It is my life."

The 52-year-old left 'Spin City' in 2001 to spend more time with his wife, Tracy Pollan, and family. But Fox said after guest starring on shows like 'The Good Wife', 'Boston Legal' and 'Curb Your Enthusiasm', he's wanted to come back.

"I spent that time with my family during their formative years and enjoyed that," he said, "But it really brought me to a place of, 'This is what I do,'. This is what I was built and programmed to do, and so I wanted to do it."

It's what I love to do and it's what I've enjoyed throughout my life. And I just thought, 'Why can't I?' There's no reason not to do it."

Fox also revealed that his wife and former 'Family Ties' co-star recently taped an episode for the show.

"Tracy actually just did an episode of the show and she was great," he said. "As characters come up we'll certainly mine old friendships and work to get them involved. I think that would be great."

'The Michael J. Fox Show' premieres on NBC on September 26.