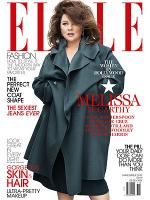 Melissa McCarthy reveals her Elle cover that had many lambasting the magazine was actually her idea.

Elle had come under criticism for featuring McCarthy in an overcoat on the cover instead of a glammed up dress. Many believed it was because the actress wasn't the typical skinny actress and Elle could hide the plus-size star under the coat.

"There was a big to-do about it, which kind of made me laugh," McCarthy told Jay Leno on 'The Tonight Show'. "How dare someone put me in a $3,000 coat? That's terrible!"

McCarthy said wearing the coat was actually her idea and she went with a tousled hair look "to kind of look like the walk of shame."

"To guys that's just got out of bed look, which is very sexy," said the 43-year-old.

"I had a great little black dress on, and on the way out of the dressing room I was like, 'I can't wait for fall, I'm so sick of the hot weather,'" she said. "I was like, 'Oooh, is that cashmere?' and I pulled it off and ran upstairs, and then Jacket Gate started."