Megan Fox Burns Will Arnett On His Too-Young Girlfriends 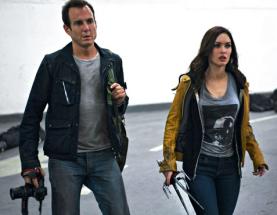 ) tells Conan O'Brien that during the first 'Teenage Mutant Ninja Turtles' Will Arnett kept bringing younger and younger girlfriends to set and she finally had enough.

"Every other week there was a this new girlfriend and he would bring them to set," recalls Fox. "And they were progressively getting younger and younger as the weeks went on."

"And it got to the point where I was like 'Buddy, I'm worried. Should I talk to craft services and make sure they have Lunchables for your girlfriends. There's no food here with cartoon characters on it."