Meagan Good Tells Kimmel About Waiting To Have Sex Before Marriage 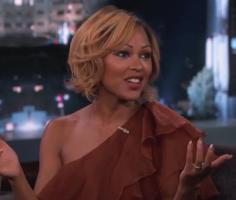 Meagan Good tried to explain on last night's 'Jimmy Kimmel Live' why she and her husband, DeVon Franklin, waited until they were married to have sex.

"It was very different and it was amazing. It was a year," said Good to a surprised Kimmel.

"We met eight years ago but we reconnected on 'Jumping the Broom', which actually oddly was a movie about a young woman who waited to have sex with her husband before she got married."

"And you must be a real method actor then," quipped Kimmel.

Asked whose idea it was, Good said: "Both of ours. He actually had been celibate for 11 years before we met."

That fact shocked Kimmel even more.

"Because he's a minister and he didn't want to get out on the pulpit and do his thing and then not be doing what he's saying."

Good wore an ultra revealing gown at the BET Awards last year (see our photos or video below).