Matthew Perry: I Can't Remember 3 Years Of 'Friends' Because I Was 'Out of It' 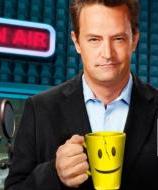 Matthew Perry checked into rehab twice while he was filming 'Friends' and now the actor admits he can't remember three years of starring in the sitcom because of his substance abuse.

In an interview with BBC Radio, Perry says he has no recollection of filming three years of the show -- from seasons 3 through 6 -- because he was under the influence of alcohol and drugs.

Perry made the admission when host Chris Evans asked Perry about his least favorite episode of 'Friends'.

"I think the answer is, I don't remember three years of it, so none of those. I was a little out of it at the time. Somewhere between seasons 3 and 6."

Perry said he wasn't inebriated during filming but he just can't remember those years very well.

The actor has since opened his own sober-living facility called the Perry House to help other men.

He is currently doing London play, 'The End of Longing', which is why he won't be able to make a taping of NBC's 'Friends' special.