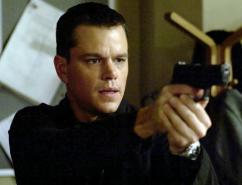 Back in May, Matt Damon said he thought 'The Bourne Ultimatum' was a fitting end to the 'Bourne' franchise and said "we have ridden that horse as far as we can."

Damon admitted to feeling like "a bit of a prostitute for putting out two number threes in one year," referring to 'Ocean's Thirteen' and 'The Bourne Ultimatum'.

Perhaps the success of 'Ultimatum' had something to do with it, or maybe Damon just realised that he didn't want to give up his most popular role but the actor tells Agence France-Presse: "If Paul Greengrass, maybe years down the road, was interested in doing another one, then I would do it, too. I don't think either of us completely put the character to bed yet."

"Personally, the character means a lot to me because the character has done so much for my career. You know, it put me in the position where I have a lot more choices of kind of movies I want to make."

The 'Bourne' franchise has made more than $900 million worldwide, with the third movie now crossing the $400 million mark and responsible for nearly half the total.