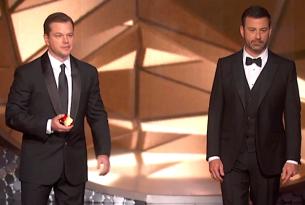 Matt Damon found yet another way to get on to 'Jimmy Kimmel Live' on Monday night.

The Boston native, who has had a fake feud with Kimmel for years, appeared on the show dressed as quarterback Tom Bady with the New England Patriots winning the Super Bowl.

"The most beloved Patriot of all," Kimmel said of his special guest. "We are very honored he's here tonight. He could have gone anywhere, but I got a call late last night."

"I feel great, I feel like I'm going to Disneyland," Damon said looking away.

"Why are you still in uniform?" Kimmel finally asked. "Take your helmet off."

"I did it! Yes!" Damon yelled as Kimmel pulled off his helmet. "If I'm not on the show right now, where am I? I'm on the show. Touchdown! This is touchdown! I won the Super Bowl and I won your stupid show."

Kimmel tried to convince him that it didn't count because he wasn't on the couch.