Mark Hamill Was 'Stunned' with Skywalker in 'Star Wars: The Last Jedi' 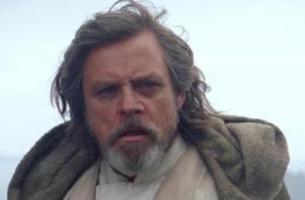 Mark Hamill says he wasn't expecting the turn of events in 'Star Wars: The Last Jedi'.

But after his brief cameo as Luke Skywalker in 2015's 'Star Wars: The Force Awakens', he was excited just to get back on screen.

"I didn't know I'd be a literal cliff-hanger, actually standing on a cliff," Hamill jokes with People about the end of the 'Awakens'. "In a way, it was a blessing in disguise because I could have all the fun of participation without the pressure of any heavy lifting. It's different this time."

"Luke in scuba gear with Rey, discovering the underwater remains of the destroyed Death Star – there were all these situations."

"Luke says, 'It’s time for the Jedi to end.’ This comes from the most optimistic character in the original trilogy," Hamill says. "I was stunned!"

'Star Wars: The Last Jedi' is poised for a massive opening as it hits theaters this weekend. The Rian Johnson-directed film is receiving rave reviews and is expected to earn upwards of $400 million worldwide in its opening weekend alone.