Mark Burnett To Create 'The Bible' Drama For History Channel 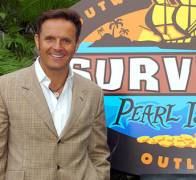 Mark Burnett, the man behind hit reality television shows 'Survivor' and 'The Apprentice', wants to take a closer look at the stories of the Bible.

The television producer has made a deal with History Channel to mount a 10-hour drama series based on the stories of one of the most discussed books in the history of mankind.

The series will combine live action with computer-generated imagery to retell stories ranging from Noah and the Ark to Exodus to the crucifixion and resurrection of Jesus. It will not be a documentary but rather a scripted, acted drama.

Burnett says he and wife Roma Downey, who starred on 'Touched by an Angel', have been working on the project for two years.

"People apply personal meanings to the Bible. Our job is to tell the stories in an emotionally connected way," he explains. "Some of the stories are obvious but we will also select some lesser known ones."

"Once in a generation someone gets to breathe new visual life into that book. I could be 80 or 90 and it could still be on television," he says of the chance to create a 'legacy' project of sorts.

Burnett says he was inspired to take on the project after watching the classic Cecil B. DeMille version of 'The Ten Commandments'.