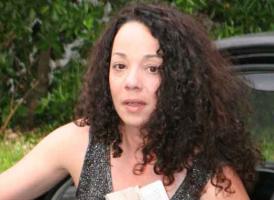 )'s sister has been arrested on a prostitution charge in Saugerties, New York.

According to the Daily Freeman, Allison Carey was arrested by police in an undercover investigation where a police officer posed as a client, exchanging money for sexual favors.

Police setup the operation after seeing an ad the HIV-positive Alison had posted. She had been operating out of a local hotel for one week and police are urging anyone who may have had an encounter with her to contact their doctor "particularly if it was unprotected."

"Im a pretty lady looking for guys who are looking to have some fun and get into a world of pleasure that other woman just cant provide two you, woman with the ability to make the earth move for you and to get you to see stars," read the 55-year-old's ad. "Oh yea with me its, 'ITS SUCH A SWEET, SWEET FANTASY BABY, WHEN I CLOSE MY EYES I COME AND TAKE YOU ON AND ON.'"

Mariah Carey and Allison have been estranged for years. Earlier this year, she made a video plea to the superstar to ask for financial assistance that obviously never came through.