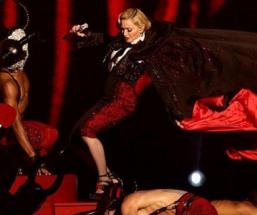 Madonna gave fans a shock when she tumbled down the stairs during her Brit Awards performance last night.

The 56-year-old singer was closing the show with a performance of her song
'Living For Love' when a male dancer tugged on the long cape she was wearing.

But instead of the cape coming off, Madonna was pulled and fell backwards on three steps.

In a post on social media following the show, Madonna said she was doing fine.

"My beautiful cape was tied too tight! But nothing can stop me and love really lifted me up!" she wrote. "Thanks for your good wishes! I'm fine!"

The performance was to be the show's big finale. Other performers on the night included Taylor Swift (photos