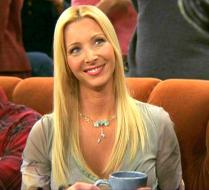 A Los Angeles County jury has ruled that Lisa Kudrow owes her former manager $1.6 million in residuals from her work on 'Friends'.

The verdict was returned in a lawsuit filed by Scott Howard, who claimed Kudrow owed him five percent of her earnings after they entered into an oral agreement in 1991.

Kudrow contended during the trial that she paid Howard more than $11 million before they parted ways in 2007. However, he said Kudrow was still obligated to pay him from her earnings on Friends and other projects.

The verdict came in large part hanks to testimony from Howard's expert witness Martin Bauer, a longtime Hollywood agent and manager, who explained that managers are paid for all projects their clients accept while being represented -- even if they end their working relationship in the future.

"I would never make that deal," he told the jury. "The only consequence of a termination is on future projects."

Kudrow, who started on 'Friends' making $13,500 an episode but went on to earn $1 million per episode, continues to receive healthy residuals from the hit comedy.

Kudrow's attorney, Gerald Sauer, says the verdict will be appealed.