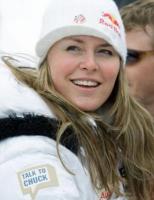 ) is speaking out after nude photos of her and ex Tiger Woods were leaked online (uncensored link).

"It is an outrageous and despicable invasion of privacy for anyone to steal and illegally publish private intimate photos. Lindsey will take all necessary and appropriate legal action to protect and enforce her rights and interests," her spokesman says in a statement.

"She believes the individuals responsible for hacking her private photos as well as the websites that encourage this detestable conduct should be prosecuted to the fullest extent under the law."

The explicit photos, including a full-frontal nude photo of Tiger Woods that he apparently sent to her while they were dating, were stolen from the Olympic skier's personal cell phone.