Lindsay Lohan Accuses Fiance of Cheating, Hints She May Be Pregnant 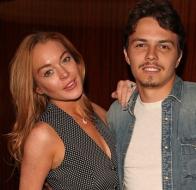 ) accused her Russian millionaire fiance Egor Tarabasov of cheating on Saturday and also hinted that she may be pregnant.

Lohan first said there was trouble in paradise in a Snapchat video with fans on Friday, saying: "My fiance's being really angry at me, but I'm drinking water to get him to come home. Honey, come home, please. ET phone home."

The following day, she wrote Tarabasov didn't come and said he was having an affair with a hooker.

"I guess I was the same at 23… Shitty time-it changes at 26/27 thanks for not coming home tonight. Fame changes people."

"Wow thanks fiance with Russian hooker," she said. "First time in my life-bare with he cheated on me with hooker."

An hour later she shared a picture of herself with a baby bump from her 2009 movie 'Labor Pains' and wrote: "labour pains trainer – I am pregnant!!"

Lohan then shared the name, email and UK address of the hooker she claimed Tarabasov was with in a since deleted post.

"It's legal if you're selling yourself and not a Russian from Moscow, right my baby?"

Lohan became engaged to her boyfriend Egor Tarabasov in April after eight months of dating.