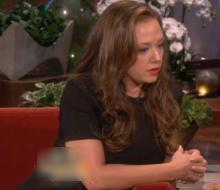 Leah Remini wants a federal investigation into the Church of Scientology.

Remini says she wants to expose "all of the abusive practices of Scientology" including "sexual abuse and physical abuse."

"I'm talking about the FBI, the police, the Department of Justice, the IRS," Remini tells THR.

"If the FBI ever want to get anywhere, all they would need to do is a raid. Everybody who's ever gone to Scientology has folders and everything you've ever said is contained in those folders."

The Church of Scientology has condemned the series.

"Leah Remini is doing this show for the money, just as she profited from her book. In addition, she attempted to extort the Church by first demanding $500,000, followed by an additional $1 million, because the Church invoked its First Amendment right to respond to her false claims with the truth."

"This shows the extent Leah Remini is willing to go in order to distort the truth about Scientology."