Leah Remini: Tom Cruise Is 'Diabolical' In His Support Of Scientology 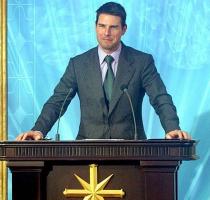 Leah Remini isn't holding back as she continues her crusade to bring down the Church of Scientology.

Asked whether Tom Cruise was a good person during a recent question and answer session with fans, Remini gave a rather candid answer.

"No! Just going to get straight to it, no!," she said. "There is a public persona of the guy who looks at you directly in the eye and shakes your hand and hugs you and is an attentive person to you and there's the person behind the mask who is a completely different person."

"Someone could say we all have that — what we are to the public and who we are behind the scenes, but the people who are around Tom and work for Tom, not even people who are Scientologists, they will say he is diaboloical."

Remini said Cruise is "very similar to David Miscavige, they could be twins."

Miscavige is the leader of the Church of Scientology.

Leah Remini is making the rounds to promote the upcoming second season of her docuseries 'Leah Remini: Scientology and the Aftermath'.